This article originally appeared in the February 2018 issue of Yachting Magazine. By Patrick Sciacca

The Prestige 680 S is a well-balanced express cruiser and flybridge yacht combination.

Hybrid is a term often associated with diesel-electric- powered yachts these days, but the Prestige 680 Sportyacht represents a different type of amalgam, one of a sportlike express cruiser and a flybridge yacht.

The design’s linchpin is a retractable roof above the bridge-deck helm. You generally don’t see a retractable roof on the bridge deck of a flybridge yacht because the upper helm usually sits directly above the lower one. But take a look at the profile of the 680 S in the photograph above. The builder placed the upper helm station abaft the opening roof while keeping the vessel’s profile proportional. That’s no easy task. There’s always the risk that the flybridge will look like a cake topper sliding off the cake. Clever engineering and construction made the feature possible. The builder designed a series of supporting steps strategically placed into the yacht’s super structure above the salon head-liner, eliminating space-eating bulkheads. Each step drops the vessel’s height by about 12 inches, reducing the center of gravity, which leads to weight savings.
Additionally, the 680 S’s 16-foot- 5-inch air draft, sans radar arrays and such, helps create a relatively low and bridge-friendly profile. 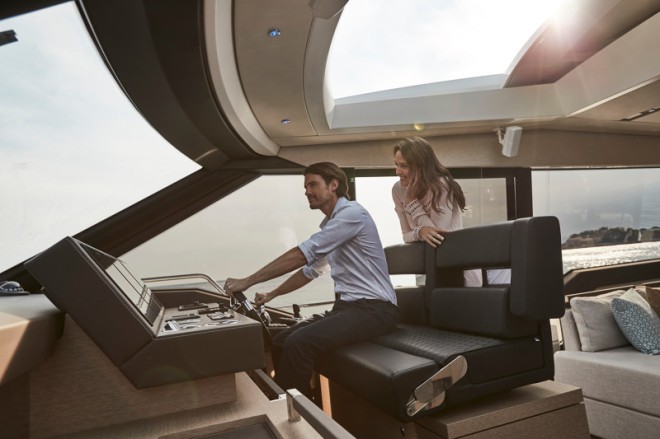 I noted clean sightlines at both helms throughout the rpm range of the twin 900 hp Volvo Penta IPS1200s. The lower helm had raked, composite windows for-ward and house-spanning side windows. It also had side-deck access to starboard, helpful when cruising shorthanded.

Conditions on test day were flat-calm. The 680 S came close to the projected 30- knot top speed. From a stop to wide-open throttle, the yacht’s bow rise was subtle coming out of the hole and onto plane.

Supporting the design of the 680 S is an infused fiberglass hull. Longitudinal stringers and Airex-cored bulkheads are also infused to enhance strength without adding weight.

The salon layout follows the builder’s goal of space optimization. A galley-up aft and to port services guests at the L-shaped dinette across and at the teak cockpit table for alfresco meals. An L-shaped settee forward and to port provides another dining and conversation space. The salon feels wide open thanks to nearly 360 degrees of glass and 6-foot-6-inch average headroom.

The Prestige 680 S effectively blends two yacht styles into one yacht that has spirited performance. And who doesn’t like two yachts for the price of one?

That’s the range of the 680 S at her 25-knot cruise speed, based on the vessel’s 911-gallon fuel capacity. At the yacht’s 30-knot top-end, her maximum range drops to
313 nautical miles.

The foredeck has a sun pad and dodger for kicking back when on the hook, giving guests sun or shade. Bench seating here lets a few more guests take in the views while sipping a sundowner.

This yacht can be set up with a three- or four-stateroom layout, plus crew quarters for two abaft the engine room. In the four-stateroom setup, there are two twin-berth spaces for-ward of the amidships master, which has a notable headroom of 7 feet. In the three-stateroom scenario, the twins combine into a suite. There is a forepeak VIP in both arrangements.