This article originally appeared in the December 2017 issue of Power & Motoryacht.
The Prestige 520, an evolution of the popular 500, attracted huge crowds when it debuted at Cannes.

When walking various boat shows I’m always interested to see what boats are resonating with boaters. One quick and easy way to tell if a model is new and popular is by looking at the shoes on the dock beside it. It may sound like an odd trick, after all, to quote Morgan Freeman in Shawshank Redemption, “How often do you really look at a man’s shoes?”

Sometimes you’ll see a nice selection of designer shoes (think polished Italian loafers). Other times you’ll spot a couple pairs of flip-flops. Every time I walked passed the Prestige 520 at the Cannes Yachting Festival in September I saw piles of shoes of all shapes and sizes: boat shoes, dress shoes, designer shoes. The point being the 520 was packed with visitors during the entire duration of the show. I set up an appointment with Prestige America’s President Nick Harvey to see what all the fuss was about.

The fuss, he explained, was expected. The 520 is the evolution of the brand’s popular 500, of which, coincidentally, 500 have been sold in the six years since its launch. “We’re still offering the 500 because it’s still really in demand and at a slightly lower price point,” explained Harvey as we ducked past a group touring the boat.

Indeed, the 520 is essentially the same hull as the 500, but with updated features and styling that reflect years of customer feedback. The changes start in the hull, where the fiberglass for the 500 is hand-laid, and the 520 is resin-infused.

From the hull up there are tweaks to the layout that take a careful eye to really appreciate. Things like the L-shaped sofa in the cockpit, a more modern/angular helm on the flybridge, a redesigned radar arch, a sunpad on the bow with a new adjustable seatback. It seems everywhere you look, Prestige has updated something.

One of the major changes Harvey pointed out was the sitting area in the salon; it’s to starboard just behind the helm. It’s a clever little seating area that is raised to allow for better views underway. The helm itself—with a bench seat for two—has an electrically adjusted seatback that actually raises and lowers at the push of a button. Push up and you’re sitting squarely at the helm with the ocean before you. Push down and it lowers, and suddenly you’re facing as many as 10 seated guests sharing the space with you.

In -between these two seats is a side door that customers demanded. I walked through it a couple times and noted how easy it was to get in and out, no morning calisthenics or gymnastics experience required.

I’ve learned from experience on other Prestige models that this builder puts a passagemaker-level premium on stowage. Every nook and cranny is used, which means there’s usually a creative space solution on each model. The 520 is no different. In the corner of the master stateroom is an angular closet that Harvey walked into for effect. On many boats it’s a space that would go unused or be dedicated to wire runs. Here you could hang enough clothes for a week or two underway.

Many of the differences between the 500 and the 520 may seem small, but in many ways it’s the details that were improved. When you add up all those little details, you realize this is a new model with a mountain of shoes behind it and a full order book ahead. 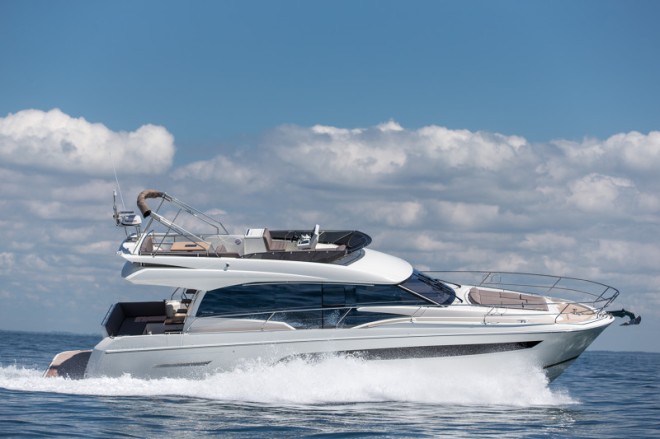 Two qualities of a truly successful boat builder are the ability to constantly innovate and consistently introduce new models that meet the changing needs of the modern boater. For the past 20 plus years, Prestige Yachts has proved to be this kind of builder which is why we’re inviting you to say “hello” to our newest model, the Prestige 520.

Designed by Garroni Design in conjunction with JP Concepts and the Prestige design team, the Prestige 520 succeeds her predecessor, the very successful Prestige 500. With an overall length of 52’9″, the Prestige 520 is powered with twin Volvo IPS 600’s, giving it great maneuverability while docking as well as exceptional on board comfort and performance underway.

Because outside living is an essential element to the boating life, special attention has been paid to creating great spaces for relaxing and dining while on deck, starting with a super-large and beautifully appointed flybridge complete with optional hardtop.

Prestige has always been known for having exceptional interiors and the Prestige 520 is no exception. A large, open salon with galley aft and plenty of light offers the perfect space to live your life with family and friends in grand style.

Down below, the Prestige 520 offers 3 separate cabins and two large heads and showers. The master cabin enjoys the benefit of being separate from the guest cabins and is accessed via a private stairway just opposite the galley above.

The Prestige 520 will be making its European debut next week in Cannes in the South of France at the annual Cannes Yachting Festival from September 12-17 and her North American debut at this year’s Fort Lauderdale International Boat Show (E-Dock/Lime Zone) in Fort Lauderdale, FL from October 1-5. We look forward to welcoming you on board!