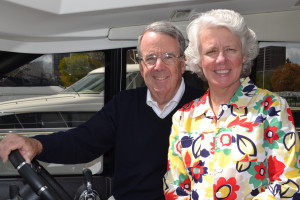 Starting in September, 2017, Aboard their Prestige 500S, Loofah III, Sue and Art Wittmack open another chapter of their lives by embarking on a 6,000 mile, yearlong adventure called “America’s Great Loop.” Follow their journey! CLICK HERE 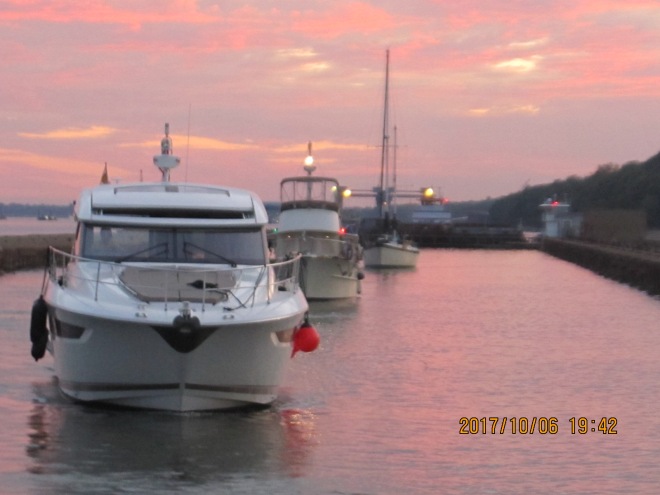 Frequently, as we are having breakfast, enjoying coffee,  catching up email, planning the day and making entries into our various logs, the boat “CAPT SID S” returns to its mooring place. (Upon closer inspection, it appears that faint lines through the “S” renders it a “$” sign.) 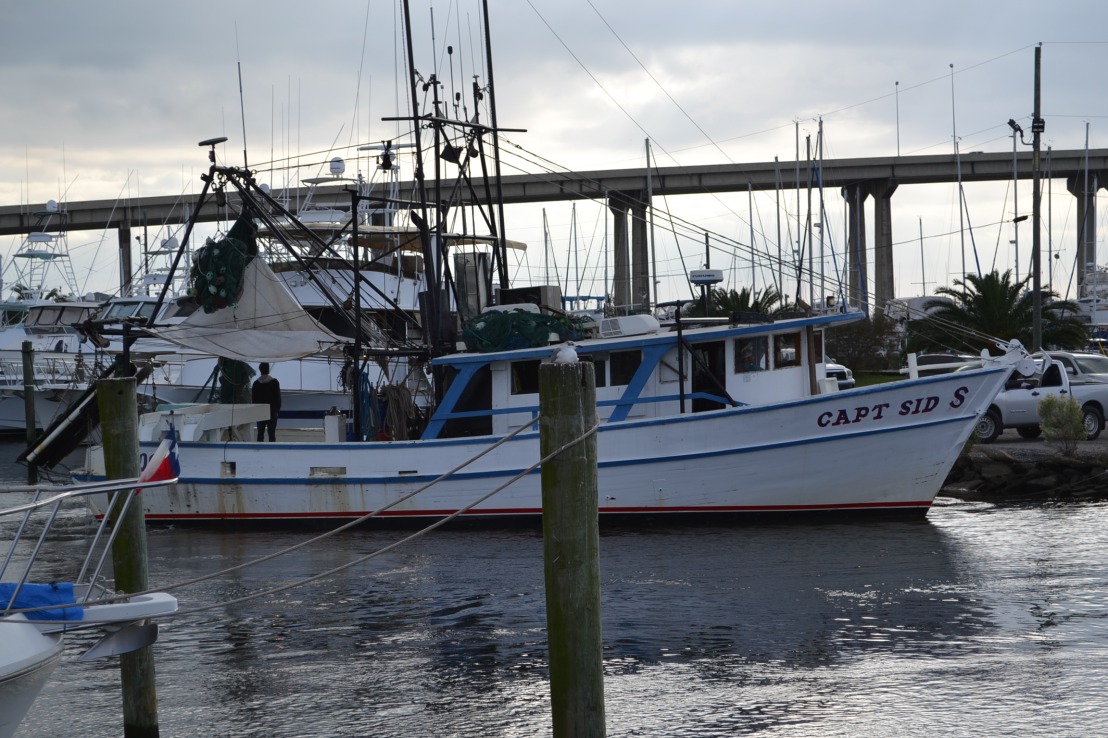 A small, grey pickup truck is always there to greet it. Usually, a couple of coolers are passed from the “shrimper” to the shore.  Today, there were none passed.  Time, labor and fuel invested with no return. Again, we counted our blessings and prayed for those who work so hard, in so many diverse ways, to put food on our tables!

Time seems to fly by.  It was 11:30 when we completed reading and returning email, observing marina operations, and starting to consider our next leg, down the Gulf Intercoastal Waterway.  As some of our fellow mariners are already on their way, we get emails and text messages daily, with their observations, suggestions, and concerns.

We continued to receive some “guff” regarding our rental car.  It’s a Yaris. 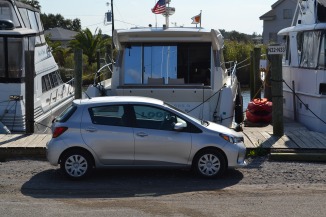 When we initially drove it into the marina, a fellow Looper didn’t think it “was in keeping with our boat.” Today, someone asked if we were planning to put it on our swim platform. Enough!  It’s a great size.  We have downsized from a house to a condo; maybe it’s time to downsize cars as well!

As we did our circumnavigation of Mobile Bay the other day, we saw a “Camping World”, an RV/camping super store, selling everything from soup (dehydrated, awaiting water over the campfire) to a large inventory of RVs.  We needed to return.  And did.  Is a “land cruise” in an RV, in our future?

The afternoon outing to Camping World served two purposes: 1) to see the store, 2) to help Bill and Bobby (First Forty) advance their car to the Homeport Marina. We agreed to meet them at Lulu’s at 5:00 and to have dinner at Ed’s Seafood Shed on the return.

Ed’s sits on the original causeway that runs across north Mobile Bay, which I-10 now parallels. 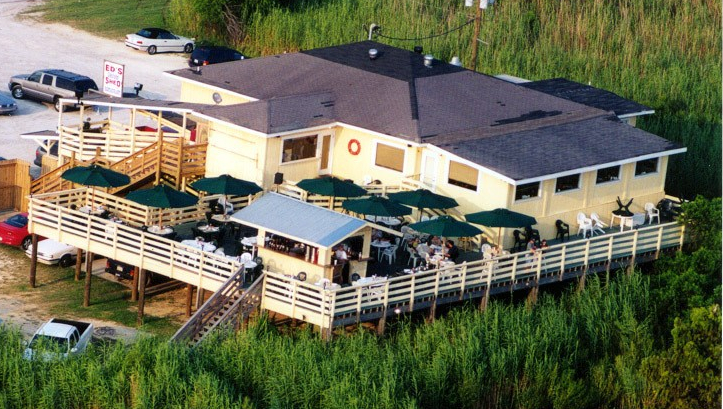 Although just opening in 2000, it has become a well established favorite of locals.  It is “Home of Yo Mama’s Platter”: “A cup of ED’s famous gumbo, a cup of garlic cheese grits, a cup of turnip greens, served before a platter of fish, oysters, shrimp, scallops and crab claws and Ed’s fries – finished with Yo Mama’s Dessert.  Served family style (NO substitutions please) 39.95”.  We passed, and choose to downsize.

Returning to the marina, we saw some water running down the parking lot.  Concerned that a water main had broken, we surveyed the parking lot with our headlights.

Shortly, we were able to determine the water was emanating from a marshy area on the north edge of the lot.  High winds and a rising tide was piling water in the bay.  As high tide was still three hours away, Art used his surveying skills and selected a high point to park the car.

We hit the sack… until the front went through and broadsided Loofah with 30- to 40-mph gusts. Art, in his pajamas, doubled the stern line as the frontline winds passed, and the rains began.  It was a narrow front, lasting just a few minutes, but it was fierce.  Happy that we were securely in a slip, and not at sea, we returned to our berth, and sleep.

It was time to burn some fuel, this time in the Yarus we had rented.  Sue’s research indicated that we should head to Dauphin Island, about 20 miles south. We are always attracted to long causeways, bridges, car ferrys and forts.  This had all of them!

As we toured the island, it was clear that this “barrier island” had been hit hard by recent hurricanes.  The municipal fishing pier was now land locked in sand deposited around it by “Katrina.”

More recently, hurricane “Nate” hit it with a good punch.  There was a checkpoint on the only road to the west end of the island through which only residents and contractors could pass.  Dumpsters topped with debris and “For Sale” signs were everywhere.  For those interested a WKRG News 5 article, actually posted this afternoon at 4:12 PM, follows today’s entry.  FEMA has been, and continues to be, busy!

Talking about properties “For Sale,” one of these five “boat houses” we passed was selling for $179,900.  Not sure of the floor plan. Any takers? 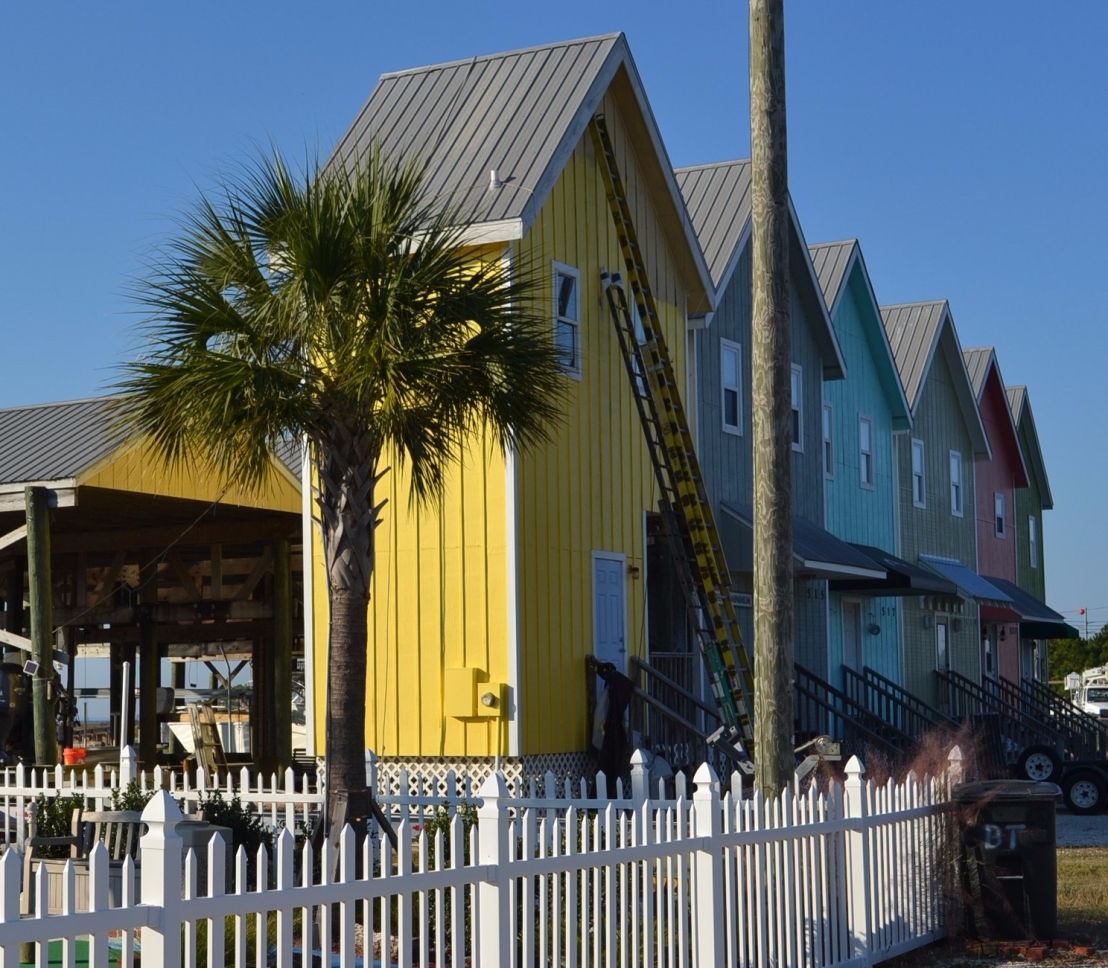 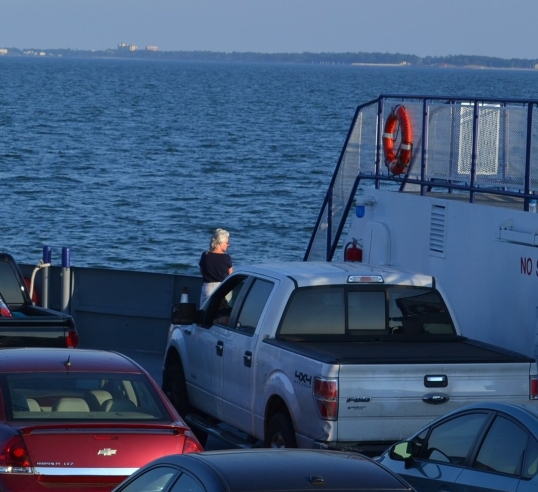 Never wanting to miss a ferry ride, we drove to the east end of Dauphin Island for the 35-minute crossing to Ft. Morgan Peninsula and Gulf Shores. 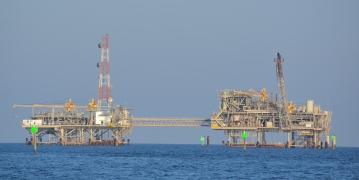 We had read that a natural gas field had been discovered under Mobile Bay and it was hard to miss the abandoned wells that dotted this end of it. 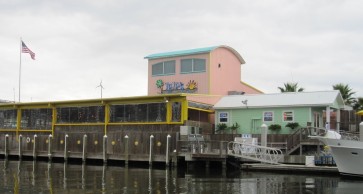 Our destination was “Lulu’s.”  Lulu, the owner, says she is Jimmy Buffet’s “crazy sister.” The gift shop (one t-shirt lighter) has all kinds of Lulu and Buffett memorabilia and CD’s.  It is a large and popular spot (for both locals and Loopers), located in the Homeport Marina.

Lulu’s and Homeport are located at mile marker 155 of the Gulf Intercostal Water Way so we will see them again, in about 10 days. 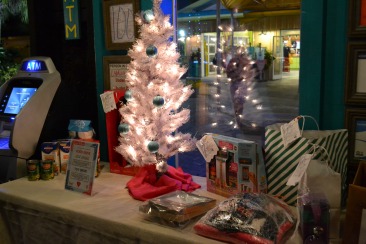 Leaving LuLu’s, and all along the way, we were reminded that Christmas is coming! With sunny days, sandy beaches, and the warm waters of the Gulf replacing blowing snow, it just doesn’t seem right.  Oh, well; we’ll take it.

Our mission completed, we headed up the East Shore, across the long  I-10 causeway at the north end of the bay, and back to Loofah.