On The Rocks but a Long Ways Away from Rock-Bottom: By Paul Fenn

Spend enough time on the water and it’s only a matter of time before you find yourself going aground. If you’re lucky, and you’re grounding is a soft one, as in mud or sand, the result is usually little to no damage; except to your pride which may be bruised but not broken. If you’re not so lucky and you’re grounding is a hard one, like hitting a rock, it’s an entirely different story altogether. Anyone who’s done this, knows that it causes your heart to jump right into your throat and rattles your bones from your head to your feet. It’s an experience you will never forget! If it sounds like I’m speaking from experience, I am. When I was in my late twenties, so along about 1987, I found myself in dungeon fog picking my way through Watch Hill Passage into Fisher’s Island Sound with a strong ebb tide under my keel. Although I navigated the passage OK, I misjudged the strength of the current and all of a sudden “CRACK,” I hit the reef and it was all granite. The rock felt nothing. But me, I still shiver when I reflect back on that moment, lost in fog and on the rocks. Definitely not one of my better days! 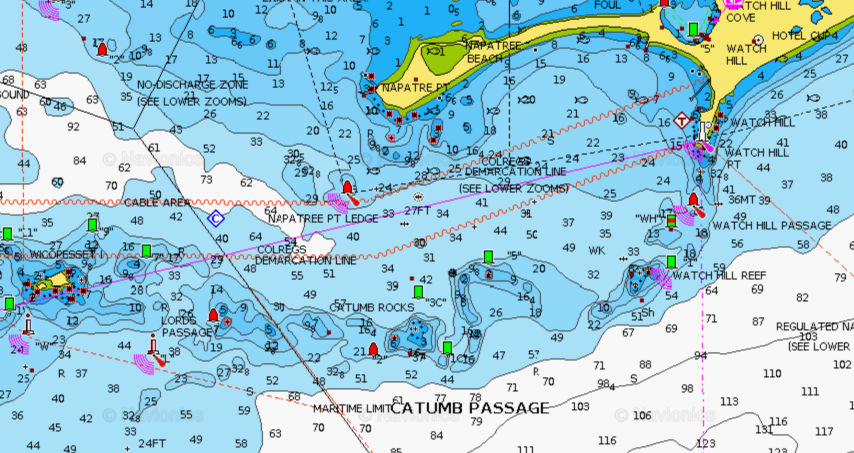 Watch Hill Passage is just one of several passages or channels that provides a safe route into Fisher’s Islands Sound from Block Island Sound. Currents are strong here during peak tide changes so you have to be careful especially in fog.

Recently, my friends Art and Sue Wittmack, had a similar experience aboard their Prestige 500S, Loofah lll. And while on the surface (no pun intended) this story is not an overly happy one, there are elements of it that make the whole thing not so bad. Before I go too much further, you should know that Art and Sue have been working their way around the eastern U.S. via the Great Loop. They started their adventures last September in Chicago and have been underway ever since, traveling counter-clockwise around the country. Up until, “the grounding” last week, they’ve had a marvelous trip with no significant issues. But as I said, spend enough time on the water and it’s only a matter of time before you find yourself going aground.

They were cruising through the North Sound at the very top of Lake Huron when they hit a submerged rock at a speed of 22 mph. As You can imagine, hitting a rock going this fast is not going to allow you to get away without some damage and it didn’t. This is however the low-point in this story, from here forward, it gets better!

So Loofah lll clipped the rock with her starboard Volvo IPS Pod, which is similar to the lower unit on an outboard engine. While this could have resulted in ripping a gaping hole in the hull, Volvo cleverly designed the IPS Pod to sheer away upon impact leaving the hull itself undamaged and the boat afloat. A good thing! 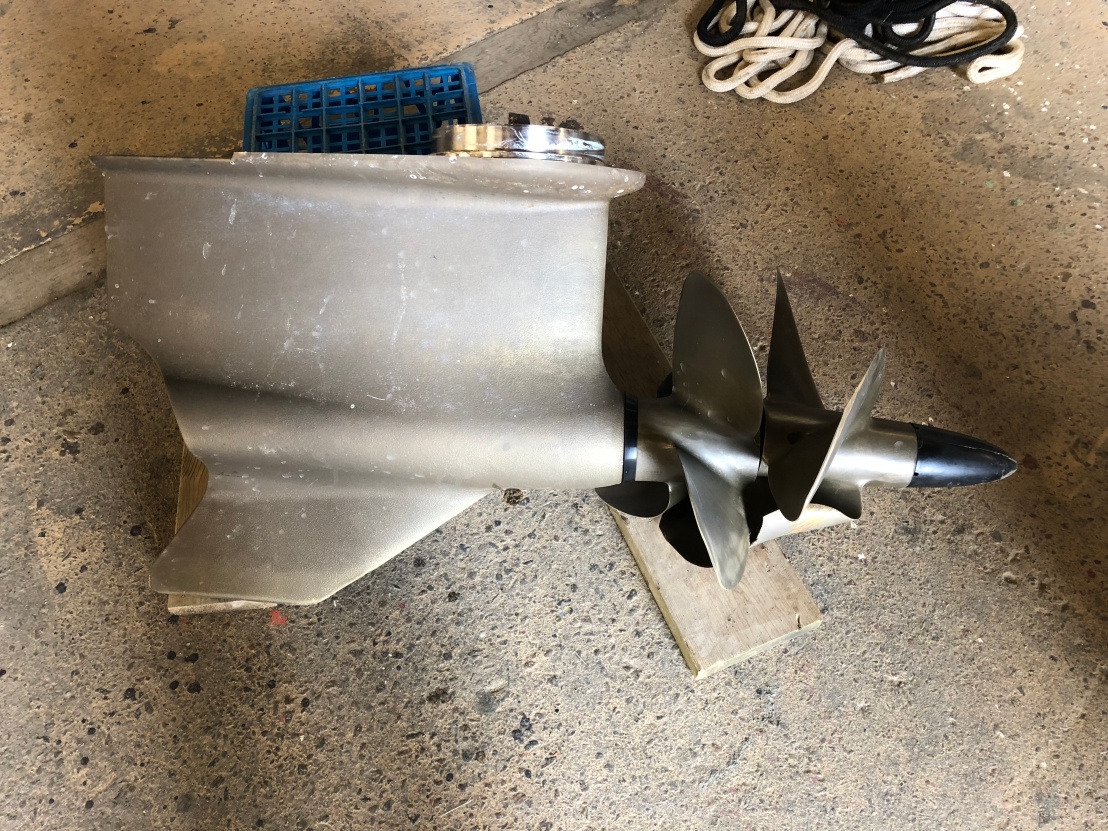 Art and Sue could have panicked and called “May Day,” many novice boaters would have, but they didn’t. Because they are seasoned mariners with thousands of miles under their hull now, they calmly brought their boat to a stop, marked their position using the MOB function on their GPS, then dropped anchor and assed the situation. This is the first thing I like about this story, they kept their heads and handled a bad situation like pros.

After realizing they weren’t sinking, they went back to find the drive unit which they did. It was laying on the bottom in about 4′ of water. Using their Kayaks, they managed to move it into deeper water and secure it to the back of the boat. And just to make things a tad more challenging, Art had to dive down 15′ to free their anchor that had gotten stuck in some rocks below. Never a dull moment when you’re on a boat!

With the drive safely secured and the boat still completely seaworthy, they got underway for Parry Sound using their undamaged second engine and dragging the drive behind.  This is the second thing I like about this story, they moved from problem to problem-solving independent of outside help. 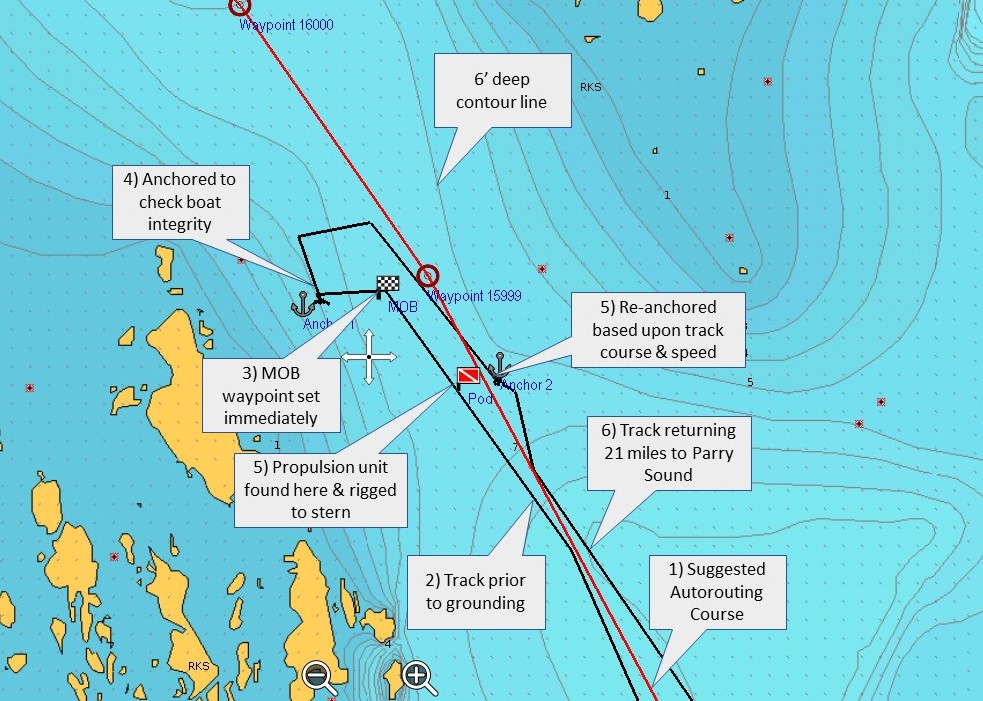 Today, Loofah lll is safely on the hard and in process of repair. The boat itself is fine, a real testament to both the quality of the Prestige 500S and the clever design of the Volvo IPS engines. And as for Art and Sue, they look at it this way, “The bad news is obvious.  The good news is that no one was hurt, no other boats were involved, LOOFAH continued to float, and although the props were bent, the port engine and drive unit were able to get us back to port without assistance.”

Loofah’s crew has been characterized, by some, as being “Pollyanna’s,” overly optimistic, glass-half-full (or more), people. This trait, “optimism” in one of my favorites and one I constantly remind my kids to work towards. Optimistic people always see the bright side, they are problem-solvers. And this is what I like best about this story, for it was Art and Sue’s optimism, their ability to turn lemons into lemonade (OK maybe not quite lemonade) that enabled them to deal with this problem in the manner that they have.

It was not a great day for these “Loopers” but while they may have been on the rocks, they were never close to hitting rock-bottom.

Oh and by the way, it should be noted that after close examination and having a closer look at the chart, Art and Sue should have had plenty of water under their keel to make safe passage, especially since Lake Huron is currently 36″ above what the chart shows. I’m not sure if the rock they hit has a name but if not, it does now, Loofah’s Rock! Watch out for it!