Summer Adventures on our Prestige 560: Part 1

This blog chronicles the boating adventure of the Rubin family in July, 2017. Casting off in Baltimore with Boston as the destination and many stops along the way. 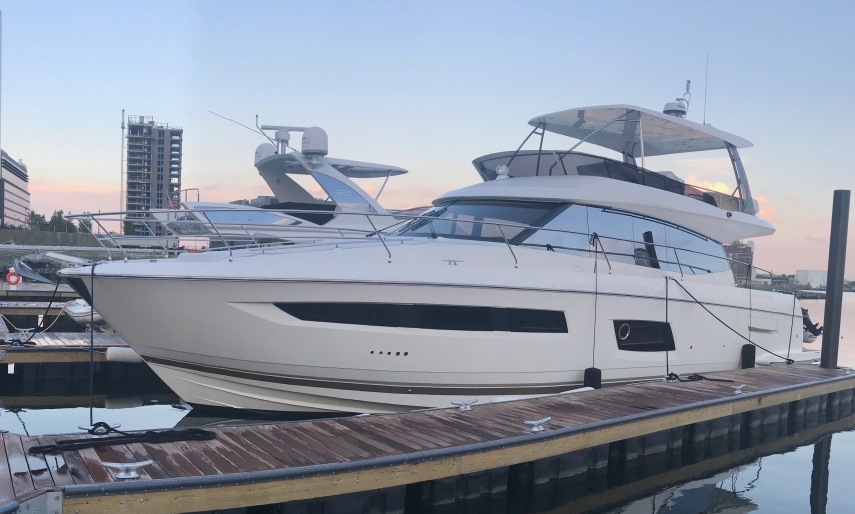 It’s finally almost here – the trip we’ve been planning for months and dreaming about for years. In the last few weeks, we kind of lost our minds and decided to buy our lifetime dream boat, a Prestige 560 Fly. We knew we would do this some day, and decided what better time than right before our 3 week boat trip to Boston? We named the boat Sababa, a Hebrew word that indicates that things could not be better, and with a boat like this, and this upcoming trip with my family, that’s how I feel!

Over the last six months, we mapped out an itinerary with several key milestones that include poker and shopping in Atlantic City along with dinner with Aliya and Dan from NJ at Buddakan, a “drive by” to waive at the Jays on the NJ shore, a play on Broadway (School of Rock), pizza (vegan for some) in Mystic, Ct, visiting Amy & Michael (Ann’s brother and family) in Providence, Martha’s Vineyard, biking in Nantucket, touring Falmouth on Cape Cod, and the highlight of our trip: stopping in Boston for two nights to visit Tamara at Camp Young Judea in New Hampshire during visiting day; and let’s not forget, Peter Lugar’s with Cousins Kenny and Laurie in Brooklyn on the way home. Finally, we may be joined by the Geva boys in Brooklyn for the final stretch back to Baltimore. Click for our full itinerary.

Day 1: Baltimore to Cape May, NJ

I woke up just after 6:00 a.m. this morning full of adrenaline. Months of planning, so many details, an unexpected new boat that we could not have even imagined buying a month ago, and the time had finally arrived. I did not want to wake up Ann, so I stayed in bed for about 15 minutes, but then I had to get moving. With everyone sleeping, I took care of some details – moved the water hose from the dock to the boat, put our empty luggage in the crew quarters, which we use as storage, removed the remaining covers from the bow and stowed them, and secured the galley. At around 6:50, I woke up Elana, and we went for a 2 mile run along the inner harbor. Beautiful morning, and lucky for me, I am still able to keep up with her – barely.

When we got back, Ann was already up and having breakfast. Elana and I took showers, and I started getting the boat ready. Turned on the generator; pulled the power cords and stowed them; turned on all the electronics; turned on the main engines; plugged in our route to the chart plotter, and we were ready to go. Benny was still sleeping, so Ann, Elana and I released the dock lines, brought them onto the boat, and we were off! (enable FLASH to watch this video clip)

As we pulled out of Harbor East marina, Ann and Elana brought in the dock lines and the fenders, and I piloted and navigated from the flybridge. 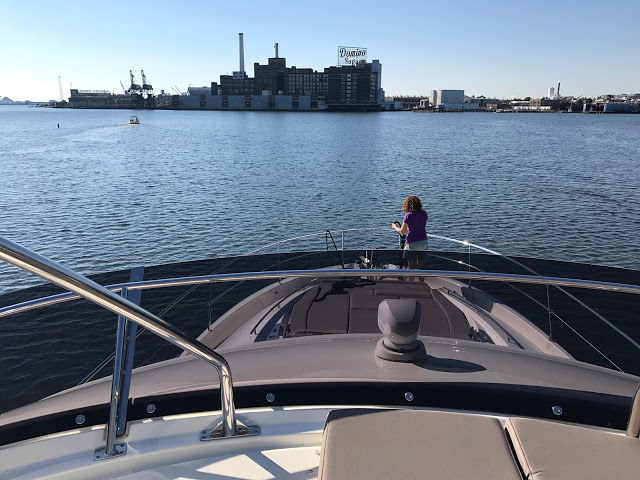 Heading out from Harbor East Marina 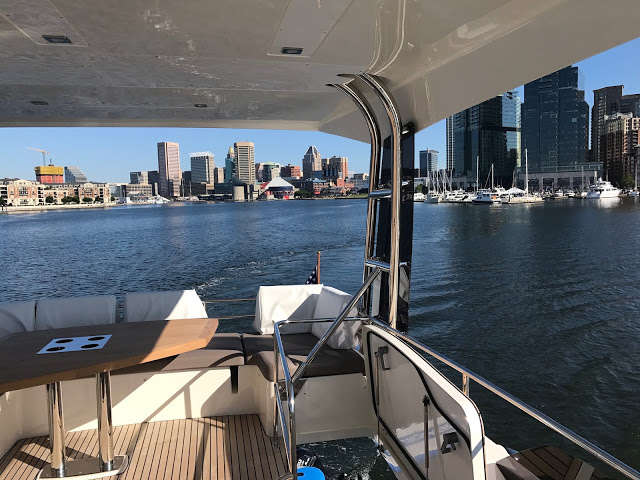 Leaving Baltimore behind us.

Our route this morning was 118 nautical miles. We cruised along just below 6 knots through the inner harbor area for about 15 minutes until we were ready to get on plane.

Day 1 route, through the C&D Canal

As we approached the Key bridge, I brought Sababa up to 23 knots, at 89% load on the port engine and 92% on the starboard one, and we were planing. 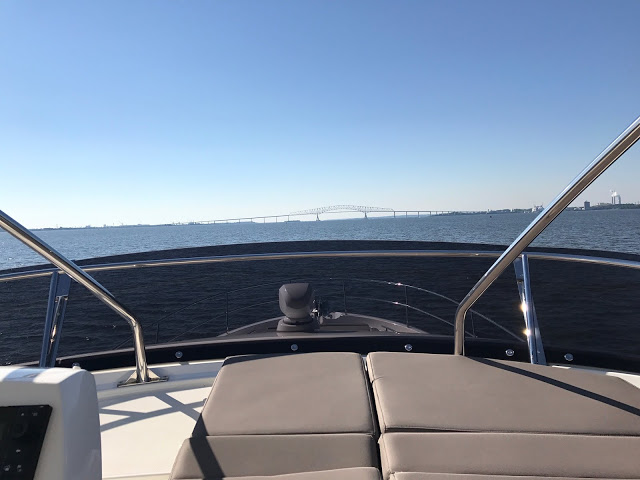 As we approached the Key bridge, I set a cruising speed of 23 knots.

Elana and Benny assumed the teenage position, despite all the beautiful scenery around them. 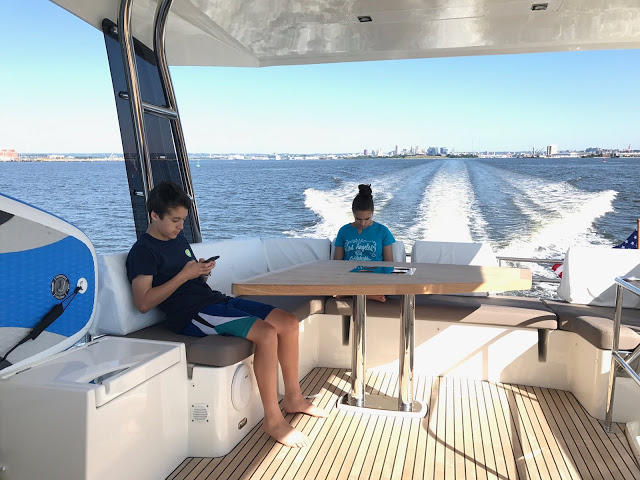 What teenagers do on a boat.

We followed the shipping channel up to the Elk River, which connects the Chesapeake to the C&D Canal. I had timed our departure to hit the Delaware River at 12:30, and despite some no wake speed in the C&D, we arrived about 15 minutes early, which was just fine. Water in the Delaware River and the Bay was as calm as can be. I had heard many stories of the rough waters there, and so it was with great relief that we had a completely smooth ride. Even as we approached Cape May, NJ and looked out on the open Atlantic Ocean, there were no waves. It was sunny and 77, and in fact, up on the bridge we had to put on sweatshirts because it felt chilly.

Our new boat, which we’ve only had for 2.5 weeks, handles great. She leaves a pretty big wake behind, and we had to be conscious of that because it really impacts other boats if we’re not careful. 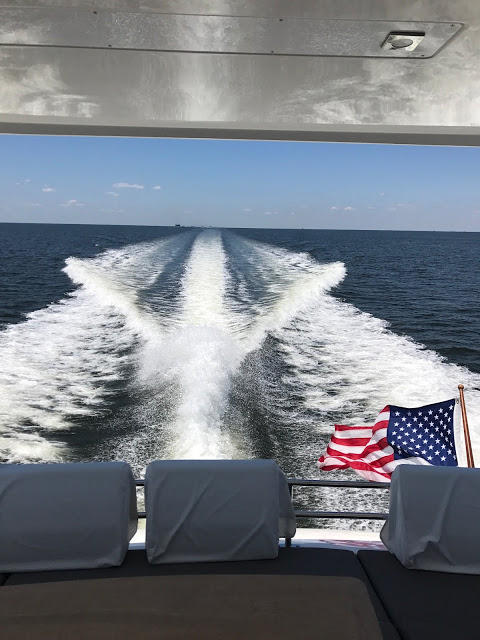 Sababa has quite a wake. We almost knocked over a sailboat in the C&D Canal, so we learned to be more careful.

We saw a couple of pretty lighthouses along the way in the Delaware Bay. 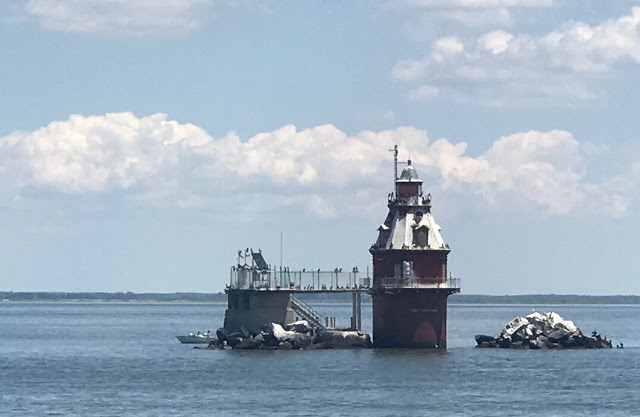 Beautiful lighthouse near Cape May inlet

After leaving the Delaware Bay, we were in a no wake canal for several miles. We tried to get on plane in several stretches where it is allowed, but our wake was too big for the canal and we were knocking boats left and right, so we came down and cruised in slowly the rest of the way. We cruised into Canyon Club marina and were lucky to get a T-head to tie up to. That’s a lot easier than docking in a slip, especially because they only had finger piers with pilings, and with this new boat, I felt relieved to have an easy docking experience. I’m sure before long, I’ll have to conquer my fear of docking in an unfamiliar marina with a fixed-pier slip, but for now, floating T-head is the bomb! 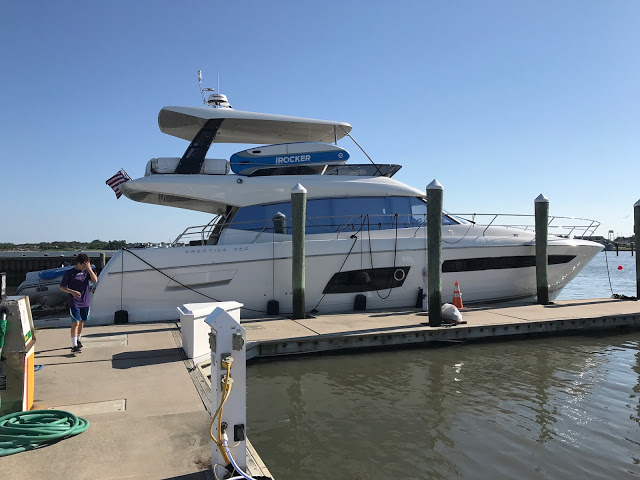 So happy to dock Sababa on a floating T-head

This marina has in-slip fueling, and we filled up, putting 307 gallons of fresh diesel (capacity is 581) in the tanks, which took about 25 minutes and was not great for my always sore back. Ann took the kids to the pool, and I stayed behind and washed the boat down for about 20 more minutes.
After the pool, quick shower, and we went into town for dinner taking advantage of the free marina shuttle. Cape May is a typical ocean-front East Coast town full of salt water toffee shops, fudge stores, and unhealthy, overpriced restaurants. Fortunately, we had Yelp, and despite the eating habits of my immediate family (carnivorous me and my 3 vegans), we found a nice Mexican restaurant, where we were all happy.

After dinner, we walked around the quaint town area and along the beach. The teenagers again doing what teenagers do (although this time it was staged). 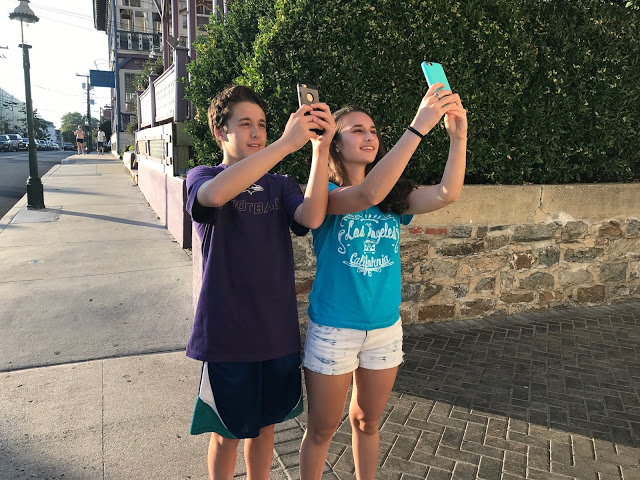 We listened to the Cape May County String Band that was playing in a park in town. Benny observed that the minimum age for being in the band must have been about 80. I got into it and started dancing! 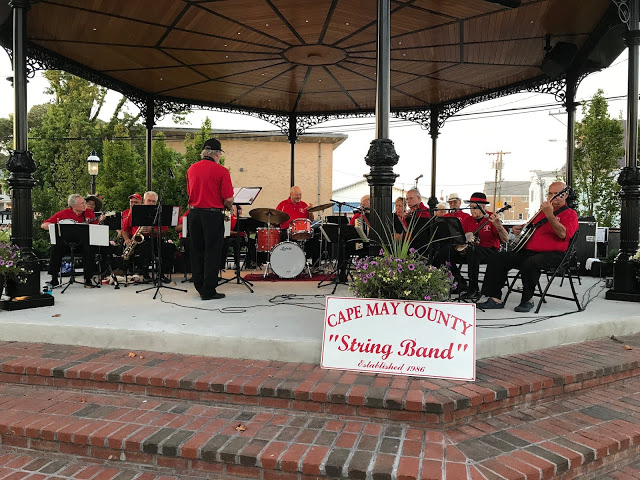 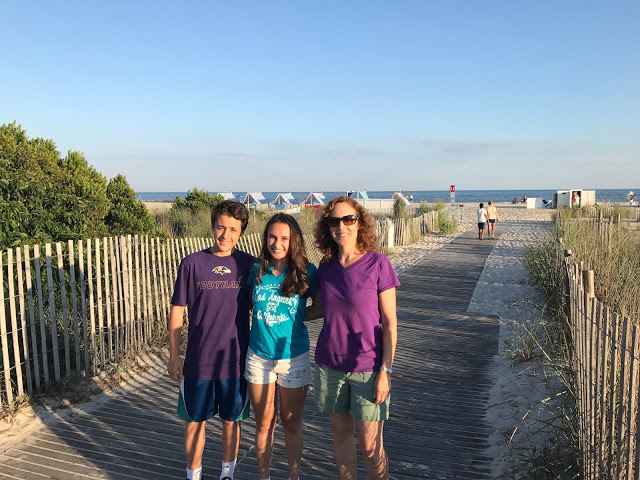 We found a trolley in town, and since we were planning on Ubering back to the marina anyway, we figured we would just see where the trolley took us. It seemed to go in the direction of our marina, and google maps on my phone confirmed that, so we took a ride, and then walked the 1.2 miles back to our marina. Totally exhausted when we got back.

Tomorrow, we have a 38 mile ride to Atlantic City. It will be my first time piloting a boat on the open ocean. Forecast calls for 80 degrees and 10-15 knot winds. Waves around 2 feet. That sounds pretty good, and Sababa should give us a pretty smooth ride. Looking forward to playing some poker at the Borgata and having dinner with our friends Alia and Dan! The kids and I are going to skip the morning run, as we are pretty sore from today’s adventures.

So far, the trip is off to a great start! Can’t believe it’s only been one day. Feels like eternity since we were home in Pikesville, Maryland.

This blog written by Avi Rubin chronicles the boating adventure of the Rubin family in July, 2017. Casting off in Baltimore with Boston as the destination and many stops along the way.